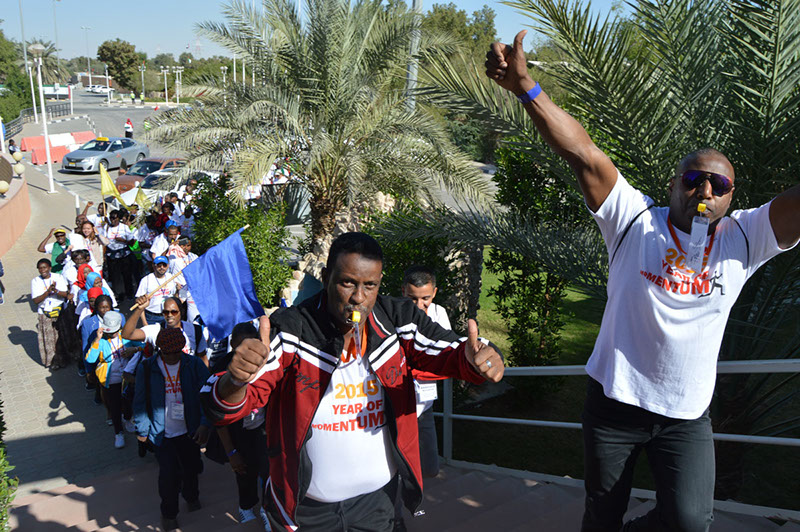 This year’s Leadership and Team Building Camp in United Arab Emirates (UAE) marked another milestone in Edmark’s history as we hit the big 1-0, being the 10th LTBC UAE, this time, held at the One to One Hotel Ain Al Faida, Al Ain.

Excitement was in the air from as early as 7am in the morning as the global Edmark family from all around the world united once again, this time in UAE. In jubilation and cheers, the parade of the teams took off, officially kicking off the 10th LTBC UAE. In line with Edmark’s culture, everyone bowed their heads in prayers, giving thanks for their safe travels and a familial bonds we all share in Edmark.

Before getting down to business as the Camp Director, Edmark Philippines’ Singing President, Mr. Joey Urquia serenaded the crowd with his latest song off his sold-out album, Finally. Known for his song-writing and melodic voice, Edmarkers treated Mr. Joey to a standing ovation before the LTBC Trainer, Coach Randy Esguerra was introduced. Synergizing work with play, Coach Randy brought participants through fun-filled and educational team-building games, revealing its lessons after each activity.

While Edmark steers the wheel in the weight loss industry, Edmarkers lead by example with the morning exercise comprising of qigong and taebo, waking their bodies up to a brand new day.

We were privileged to have with us, Edmark’s Founder and Chairman, Mr. Sam Low as he shared his personal story of how he started Edmark on top of all the good news Edmark Group of Companies have to share, among them, the opening of new branches, the successes of P4 Lose to Win 90 Challenge, the string of Edmark Expos lined up for the coming year, and the triumphant ground breaking of Edmark City’s land in Lekki, Nigeria. Before passing the floor over, he announced the theme for next year, which is ‘2016, MOMENTUM CONTINUES’.

After a dose of inspiration from the man himself, further motivation boosted the crowd as a string of testimonies from our achievers around the world were shared, namely by SCM Fred Joel from Tanzania, CM Erlinda Cahinde from Philippines, SCM Jessica Ezeani and CM Ismail Abdulmodiu from Nigeria, SCM Hama Blessing and Pelagia Chesa from Zimbabwe, and CM Hafia Bouteldji from Algeria. A special segment of testimonies were dedicated to the cream of the crop in Edmark, the line of Double Crown Managers – DCM Mahmoud Altokhy from UAE, DCM Bandar Awa Mohgoup from Sudan, DCM Abanquah Asare from Ghana, DCM Monica Nwokike from Nigeria, and last but not least DCM Dr. Kenneth Lumapas. DCM Dr. Kenneth Lumapas and Mrs. Felise Lumapas were given special recognition by our Chairman Sam Low for being a part of the Chairman’s Circle as he acknowledged and uttered high praise for all the hard work DCM Dr. Kenneth has achieved and transformed over the years.

Business Analyst, Mr. Marc Camaligan took the stage to share more good news, specifically regarding the update of the new servers which upgrades our internet services by many folds, making it much faster for the benefit of everyone. He also went on to launch the brand new Edmark TV, Your Feel Good Channel – Edmark’s newest addition to our technological enhancement.

Finally, the winners of the 10th LTBC UAE:

Edmark in the Philippines

Working hours of other Edmark branches may vary especially during this quarantine period.